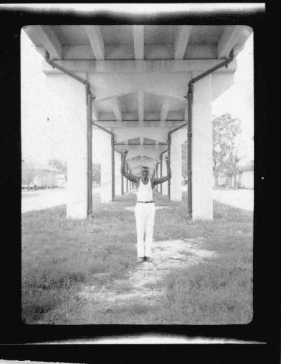 In 1934, folklorist John Lomax and his nineteen-year-old son Alan went to southern Louisiana to collect folksongs and music in many styles from several ethnic groups in English and French. [1] Among the songs in the resulting collection is “Trench Blues,” a World War I song composed and sung by John Bray in Ameila, St. Mary’s Parish, Louisiana. [2]  “Trench Blues” is important as a statement from one African American about the experience of going to war. Not many songs airing strong personal statements about the first World War by African Americans survive today. [3]

We are lucky that the Lomaxes recorded this song, given that it doesn’t fit many definitions of “folk music.” John Lomax used one such definition to guide his work: the older songs and tunes of a community, which have no known author. Therefore, he did not have a strong interest in recording contemporary music like this song. Luckily, Alan’s interests were broader than his father’s; he recorded this particular song, and apparently corrected its catalog card to make that fact clear!

During World War I, African Americans mainly did work in support of the combat troops, with a smaller number trained for combat. According to the Lomaxes, Bray did not serve in a combat unit. It seems likely that the Army would have valued Bray’s work skills.  We learn a little about those skills in another song he sang for the Lomaxes, “Cypress Logging Holler” which he used to coordinate workers moving logs from Louisiana swamps to the saw mill, a difficult job. According to his draft registration he was working as a pond man for the Ramos Lumber Company, famous for their cypress lumber, when he was drafted in 1917. 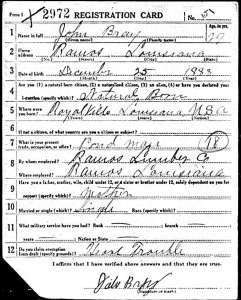 John Bray’s draft registration for World War I. His age is given as 29, but the date on the back of the card is June 5, 1917 and his birth date is given as December 25, 1888, so he was 28. National Archives and Records Administration item: Registration State: Louisiana; Registration County: St Mary; Roll: 1684999.

African American soldiers were segregated and often looked down on and even mistreated by white servicemen. The Army allowed African Americans to become officers, as they thought that it was better for the African American units to be commanded by their own officers, but these soldiers too were not treated as equal to others of similar rank. When African American veterans returned home there was often no fanfare. They were not regarded as heroes except in their own communities, and often felt forgotten or neglected by the nation they had gone to war for. There had been great hope among African Americans that service in the war would make a big difference in how they were seen as Americans. Instead, it became a galvanizing moment that led to later efforts to gain equality.

“Trench Blues,” is John Bray’s story about going to war in 1917 at 28. He tells of his experiences aboard ship while worrying about German submarines below the waves. He then describes how it felt in his “home in the trenches, living in a big dugout” of being among “40,000 called out to drill,” and going to Belgium. Listeners should be aware that he uses a pejorative word for African Americans in the song (the “n” word).  The line explains that “We went to Berlin, went with all our will and if the white soldiers don’t get him, the [African Americans] certainly will.” It is a moment in the song when Bray takes the opportunity to comment on being regarded as inferior, and to say that this was not the case, all in a short verse. The verse may also imply that the non-combat African Americans providing support to the combat troops would nevertheless stop any of the enemy from escaping. 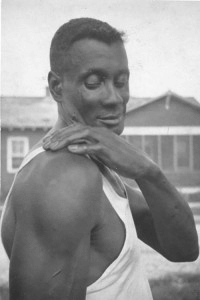 Many cultural groups have taken an insulting label and turned it around to use for themselves. A famous example is “Yankee Doodle,” a name used by British troops to insult American troops, which is now used to mean a patriot. But the “n” word is still more oppressive. Such insults are a way of disempowering a people and putting them in a lower place in society. Segregated military units and the idea that most African Americans were better suited to labor than combat also set them at a lower social level within the Army. By using this insulting word to mean something positive, John Bray is taking the power back, which was not unusual in the blues of the time. You will also hear that Bray uses a nickname derived from this insult, probably given to him at lumber camps. I take this to be another way of showing that the word has no power over him.

We do not have much biographical information on John Bray to see how the song reflects the details of his service. But what we have is a song with the ring of emotional truth. He sings of his fears, other soldiers’ fears, and the reactions of civilians. He tells of the many soldiers who lost their lives and of the triumph of victory.  Above all, he asserts the importance of the African American soldiers  — as important as any other Americans who risked their lives for their country during World War I.

This post is also featured on the Library of Congress Blog  as “World War I: ‘Trench Blues’ — An African American Song of the War.” Head over there to find more WWI stories from the Library’s collections honoring the centennial (2017-2018).   There is  another Folklife Today post about an African American World War I song here: “When I First Got Ready For the War.”

World War I Centennial, 2017-2018: With the most comprehensive collection of multi-format World War I holdings in the nation, the Library of Congress is a unique resource for primary source materials, education plans, public programs and on-site visitor experiences about The Great War including exhibits, symposia and book talks.